Oh, I’m thrilled to show off this fantastic idea for a truly unique wedding invitation idea – a Save the Date card that simply oozes Hollywood Chic! Movie buffs everywhere will love this super stylish idea from husband and wife photographers, Michelle Ferry and Josh Beller of Mi Belle in the USA. Samantha and Shane, the bride and groom, had these photos specially commisioned by their wedding photographers, Mi Belle to go the extra mile and completely set the mood for a fabulous celebration. In case you think that the name of the bride and groom have been superimposed, think again – they actually had the movie sign custom set to announce their date! Now that’s what I call going the extra mile for your wedding invitations …. Simply fabulous! 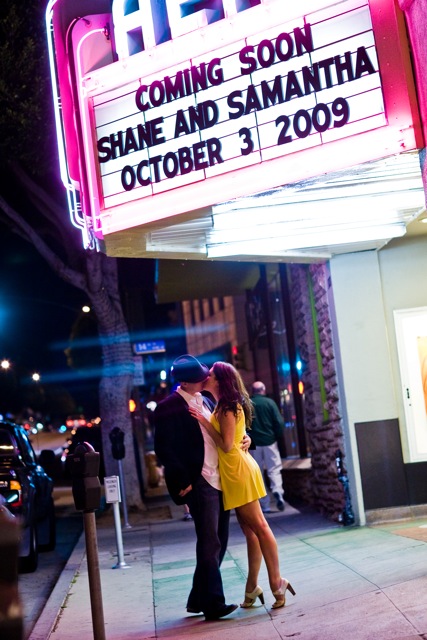 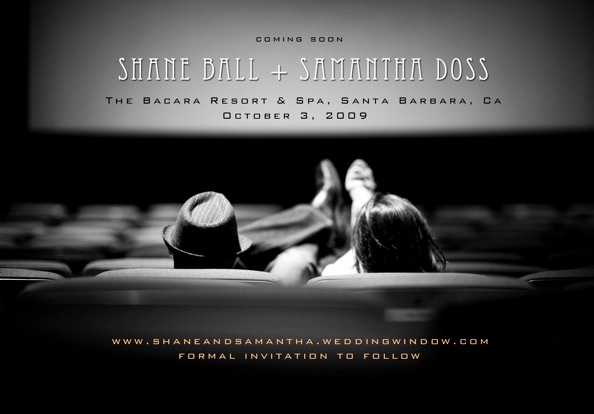 INSIDE SPREAD OF CARD

[…] are so excited to be featured today on the UK blog Wedding Invitations Shop!  Check out Sam + Shanes Save the Date! Posted in […]

We get an incredible amount of mail here at the WIS asking for unique wedding invitation ideas, to make your wedding stand out from the crowd.

Well if you have the time and the creative flair, why not make your own video wedding invitation? This could be also be used as a fun addition to your main paper invitation.  We just LOVE this video of Josh and Amy’s wedding invitation ♥!

Finding the Perfect Words for Your Invitations

Whatever your style of wedding stationery, you want to get your invitation word perfect. Like the rest of your wedding stationery, the wording on the invitations should reflect the overall style of your special day. Before deciding how you to word your invitation, you should to decide on the style of the wedding and the invitation itself. Typically, the more formal your wedding, the more formal the invitation should be. Increasingly, many brides are opting for more informal and modern ceremonies , rather than classic and traditional which means that the wording of the invitation is no longer held up to such strict rules of etiquette. Ultimately, the wording of the invitation is about what you want rather than what you think should be written so don’t be afraid to experiment with different wording styles! Our guide below will give you some ideas to get you started.

The number one rule for formal invitations, if you are sticking to convention, is that that invitations are written in the third person, referring to the hosts of the reception using their full names. There are no strict rules of etiquette but here are some guidelines to remember as a general rule (just remember simplicity and clarity are the most important considerations):
Here are some things to remember when you’re composing a formal invitation:

Formal invitations should be printed on formal heavyweight paper. Ivory, cream, and white are accepted colours for formal invitations. Classic font types, such as Roman, printed or engraved in black are traditionally used.

There are two main styles to the traditional wedding invitation. The first leaves room for the guests‘ name to be hand written in full in the top left hand corner.

(with bride’s parents hosting the wedding)

The second type of invitation includes the names of the guests in the wording:

Here are some other possible variations:

(with bride’s parents divorced or separated)

(with bride’s mother widowed, not remarried)

(with both bride and groom’s parents hosting)

(with bride and groom hosting their own wedding)

For slightly less formal weddings you may wish to leave out Mr and Mrs and other titles and write the date and time in numbers rather than words. You can also print the invitation in coloured ink rather than black with modern fonts and add printed designs to the invitation. For very informal weddings, particularly those being hosted by the bridal couple, the wording and style of the invitation can be as creative as you wish – the only limit is your imagination!

You may also wish to add your personal wedding website address and your email address to the invitation. Many couples are now choosing to complement their wedding invitations with their own custom-built wedding website. A wedding ‘wedsite’ is a great way to keep your wedding guests up to date with all of your wedding arrangements and you can also put your wedding photos online after your wedding for all to enjoy!

Here are some examples of informal wedding invitations to get you started:

(with bride and groom hosting their own wedding)